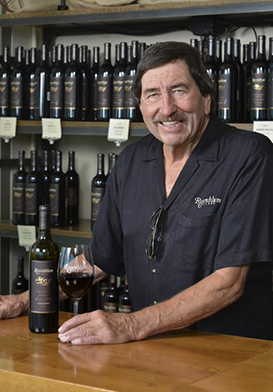 In 1978, Rosenblum Cellars opened in Alameda, California; a place known more for its docks and shipyards than for winemaking. But then again, Kent Rosenblum, “The King of Zin,” always did things a little differently from the status quo.

When most of the established wineries in California were focused on their estate-grown wines, Kent chose to explore some of the unrecognized and underappreciated grape-growing areas of Northern California. He met families who had been growing grapes for generations; dedicated growers passionate about their vineyards, who worked tirelessly to grow the best grapes possible from old vines their families had planted years before.

Their efforts showcased the difference between mountainside and valley floor grapes, the importance of soil types and their influence on the taste of a wine. Kent was fascinated by the character and complexity of the Zin grapes produced by these old vines, and was determined to capture this spirit in a bottle.

Kent took grapes back to Alameda and began to make wines, acknowledging the contributions of his friends by placing the vineyard’s name on the bottle. Working out of a factory building near the docks, Kent and his crew looked more like longshoremen than winemakers. But the wine they made spoke for itself.

From single-vineyards in Sonoma and Alexander Valley to strictly selected regional blends, Rosenblum has made more than 50 Zinfandels earning 90 or more points from Wine Spectator. It’s an eye-opening track record for Zin lovers, but at Rosenblum, guided by commitment and craft, delivering sumptuous wines is just business as usual.